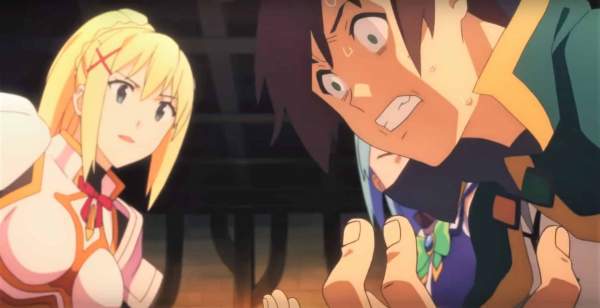 When will KonoSuba season 3 release? This is the most anticipated question for more than three years. Earlier, it was expected to come out in June 2020 but till now there is nothing out officially.

The Japanese light novel adaptation by Studio Deen premiered the show on January 14, 2016. The story follows the life of a boy who after his death sent to a fantasy world where he joins hands with a goddess, a wizard, and a crusader for a fight against monsters.

The first two seasons of the anime received mixed words from the viewers and critics with a rating of 7.8/10 on IMDb. Now, let’s read further to catch more updates regarding the third outing. (Also read: One Piece Chapter 981 Release Date, Spoilers & Manga Raw Scans: Will Flying Six Member’s Identity Be Revealed?)

KonoSuba Season 3 Release Date: When will the new installment premiere?

As of now, there is no confirmation about the renewal of the third season but there are some tough speculations that are claiming that it may occur.

This is so because, at the end of the second installment’s finale in Japan, Kazuma’s voice says, “Thank you for the support, everyone! Our true battle has just begun, and this is just the beginning of our grand adventure in this wonderful world!”

Some people considered this as a hint for more episodes but there are no cliffhangers left in the season. So, the possibility is very less, if it renews then we will update it here. If you love to see more speculations then we have a YouTube video:

You can also check news about other anime series:

If the creators somehow renew the anime series then there is a strong possibility of crafting out the story from the events of volume 5 and 6 of the original novel series. Because the light novel fans of the series have shown more love to those volumes. So, the anime may also follow the same for better viewership and ratings.

Considering the light novel, volume 4 ended with Yunyun, a member of Crimson Magic Clan announcing, “I…! I…!! I want to have Kazuma-san’s children!” Even after this statement, the next part of the light novel is focused on Kazuma and Megumin.

So, with this, we may see the past of the Megumin. After that, it is known that the creator of Crimson Magic Clan was a reincarnated Japanese person. Because of this kind of history, the clan doesn’t fight with full potential in a battle.

KonoSuba Season 3 Cast: Who will give the voices, if renews?

Right now, the second outing is not announced, so there is nothing confirmed that we know about the cast. We have the expected list on the basis of the previous edition’s voices.

If anything about the upcoming season becomes public from the official sources, then will update this page asap.

Classroom of the Elite Season 2 Release Date, Trailer, Cast, Episodes and Everything We Know So Far About Anime Series